This is an original submission to Autonomy News

The No TAV campaign in northern Italy has been fighting an expensive, unneeded and corrupt high speed railway link for over three decades. The proposed mafia-linked freight train service from Turin to Lyon has been repeatedly exposed for its fantastical predictions and is slated by local people who see no reason to leave their homes for a white elephant. If you are already thinking about the similarities to HS2 here in England then you are in the right place. I will start by giving a very brief history of No TAV, then an update on recent events. In the second half, I will concentrate on what the Stop HS2 movement can learn from No TAV.

FOR THOSE WHO DONT KNOW

For those who have never heard of the No TAV movement, it is a campaign born thirty odd years ago to resist the construction of a 270 kilometre long high speed railway (Treno di Alta Velocita) between Turin (in Italy) and Lyon (in France). There is widespread opposition on both French and Italian soil, since the railway is a corrupt scheme proposing to transport freight based on fantasy figures and the people who live along the route see no benefit (the train won’t be stopping there). They argue that the already existing railway infrastructure should be improved instead. The resistance is greatest in the breathtakingly beautiful Val di Susa (Susa Valley), which stretches from Turin to the Alps for fifty kilometres. In summer, the valley is bright with colours, the blue sky and green grass bisected by the snow on the mountains. It has a unique environment, since one side sees the sun and the other does not. The train line would rip straight through it before entering a tunnel of 57.5 kilometres to France. This tunnel would be longer than the Chunnel and in fact would just squeeze in as the longest rail tunnel in the world, if it ever gets built. Local people are concerned that drilling into the mountains will disturb uranium and asbestos deposts, that mafia construction will lead to health hazards and that the overall economic case for TAV no longer stands up.[1]

The political situation is bad. After gaining power with halting the TAV as one of the very planks of its campaign, the populist Five Star party was unable stop it; founder Beppe Grillo had been arrested at a No TAV protest in 2010, yet in 2019 Five Star could not prevent Prime Minister Giuseppe Conte from gaining parliamentary approval for the scheme. Combined with the EU promise to fund 55% of the TAV costs, it now appears unlikely the line will be stopped at the level of mainstream politics. Naturally, there is still the grassroots opposition, which prizes the will of the people over the will of corporations. Over the years the No TAV campaign has fought on many different levels; it has organised countless events, marches, demos, lectures and acts of sabotage. The Free Republic of Maddalena was set up and brutally repressed. Valley shutdowns have occurred with thousands of people on the streets. From the beginning, activists have waged a long war against the construction sites, slowing down progress considerably.[2]

Despite a mainstream media blackout, the protests continue into the present.[3]

In what was perhaps the highlight of the campaign so far, activists set up the Free Republic of Maddalena in May 2011 on land near to the town of Chiomonte, where TAV planned to build an exploratory tunnel. For a brief period, the autonomous zone flourished, with concerts and assemblies and another way of life seemed possible as archaeologists visited, philosophers lectured, actions happened and everyone ate communally. Unfortunately the republic was then brutally evicted by 2,000 agents of the state on 27 June 2011, using teargas and bulldozers against non-violent activists.[4]

Over a hundred people were injured on each side and in nearby Venaria, an elderly woman was run over and killed by a riot van.[5]

In 2015, committing a massive public relations blunder, the construction firm and former leader of the project Lyon Turin Ferroviaire sued well-known Italian author Erri De Luca when he commented that in his view acts of sabotage were justified. Unsurprisingly, they lost the case and helped publicise the cause far and wide.[6]

The latest wave of repression took place in December 2019, when the DIGOS[7] arrested people in assorted raids across the Peidmont region. Squatted social centres in Modena (Guernica) and Vincenza (Bocciodromo) were attacked. Askatasuna social centre in Turin has been associated with the No TAV struggle since the beginning and was raided again.[8]

This state harrassment was nothing new, for example in 2012 over 30 people were arrested following a day of action when hundreds of demonstrators had laid seige to a construction site, with police raiding addresses on a fruitless search for weapons and explosives. To show the diversity of opposition, those arrested included local councillors, former Red Brigade militants and people involved in Askatasuna.[9] Prosecutors attempted without much success to brand the activists as terrorists, using laws designed to combat Al-Qaeda! [9.5]

In June 2020, reports of renewed construction activity resulted in the occupation of the old mills at Val Clarea, buildings that are scheduled to be demolished to make way for the TAV.[10] The new occupation became known as Presidio Mulini (presidio meaning a physical space where activists live and monitor construction). In the following weeks there were skirmishes with police around the edges of the construction works at Chiomonte; cop cars encountered nails on the road and street surveillance cameras were removed.[11.5]

The festive nature of the No TAV movement was also on display, although sadly the annual Alta Felicità festival was cancelled due to coronavirus.[12] However, the Critical Wine festival in Bussoleno and the political ecology camp in Venaus both went ahead as planned.[13]. Most recently, the Mulini Presidio organised a weekend of events at the end of August, see flyer.[13.5] 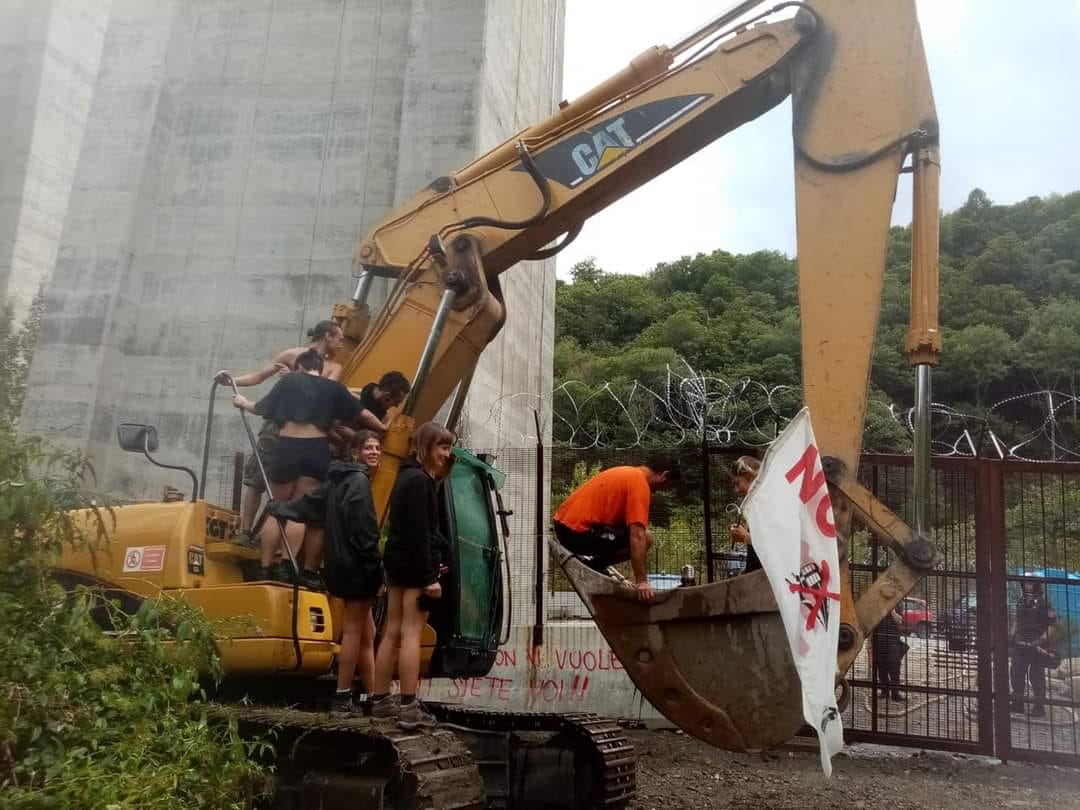 The similarities to the Stop HS2 campaign in the UK are surely obvious, yet still worth spelling out. Just like in Italy, the mainstream media blackout on the resistance here is also quite noticeable, recently a Stop HS2 camp popped up at Euston Square Gardens but you’d have to be following @HS2Rebellion to hear about it, whilst we have heard a lot of blabla on TV and radio about construction works starting. As regards ballooning costs, well nobody now thinks HS2 will cost under £100 billion. The TAV was reckoned to cost 15 billion euros in 2011 and that was a conservative estimate back then![13] Nowadays estimates range from 20 to 100 billion euros.

There is clearly massive corruption in the TAV project, which is Italy’s largest infrastructure enterprise in recent times. The ‘Ndrangheta family have deep links to construction companies in Piedmont and a 2014 investigation led to 20 arrests whilst wiretaps revealed the mafia planning to take over the Chiomonte construction zone.[15] By 2016, the European Anti-Fraud Office (OLAF) was involved, probing cost overruns and mafia links in Italy and conflicts of interest in France.[16] Roberto Saviano, author of ‘Gomorrah’ has commented: “Everybody is speaking about the TAV, but first of all we should consider mere facts: in the last twenty years the high speed railway has become a tool for widespread corruption and organized crime, a successful model of business.”[17]

Whilst critics like to characterise people opposing the TAV as NIMBYs, just as with HS2, in Piedmont the resistance comes from all walks of life, yes of course from people living in Val di Susa who will lose their land but also from the wider northern Italian area. As a No TAV activist puts it: “we became a united community looking for an alternative model of development, careful of the needs of the people living here”.[18] For the mayor of Villarodin-Bourget, a small French village on the proposed route of the line, “after we started looking at the project in details, we soon arrived at a position of complete opposition. We thought that it had been well-thought out by some super-intelligent people who knew their stuff, but we soon realised that what it has been forecast for 2020 was the opposite of what it became reality”.[19] These views sound pretty similar to what people have been saying about HS2.[20]

Regarding alliance building, there is much to learn for Stop HS2 from No TAV. The campaign is fortunate to have a base in long-lasting squatted projects, something which the UK lacks but which we can of course create, especially as we sink into an economic downturn and derelict buildings proliferate. It’s a shame that current lockdown restrictions have stemmed the usual flow of people and experience between radical projects and protest sites like the ZAD and Hambach Forest, but the HS2 camps are springing up all along the route. And we should remember that No Tav has been going for thirty years and so it is an example of where Stop HS2 is heading.

Pro-active moves such as setting up “free state” zones and presidios on areas about to be demolished by have served No TAV well. Alongside the amazing tree protection camps, these other forms of occupation might become an important part of the Stop HS2 struggle, since surely by now farmers and house owners further along the proposed route have seen the terrible compulsory purchase treatment of people in Buckinghamshire and Denham, and they might be thinking it’s better to let Stop HS2 activists onto their land sooner rather than later to save the trees. I know that’s what I’d be thinking! We only have to look to France to see how various ZADs have been influential in stopping megaprojects such as airports and dams.[21]

The level of militancy in Italy always seems to be a few notches higher than in the UK but there’s no reason why that has to be the case in future. Certainly mass mobilisation and support in Piedmont means more tactics are available and No TAV can call on thousands of people in a short time period. Simply give HS2 Limited a few more years to threaten a few more beloved local habitats and we’ll see how things are looking for Stop HS2 in the UK.