We’re delighted at this result. At a virtual hearing councillors followed the Planning Officer’s advice and rejected the application due to five contraventions of the Newcastle Development and Allocations Plan 2015-2030; four contraventions of the Core strategy and Urban Core plan for Gateshead and Newcastle 2010-2030, a breach of the Northumberland minerals plan and paragraph 211a of the National Planning Policy Framework.

Brilliant local group against the application, Defend Dewley Hill are delighted by the result. Local resident Jos Forester-Melville said, “None of us set out on the journey to become activists, but this bunch of taxi drivers, occupational therapists, managers, shop assistants, care workers, teachers, young and older people alike, have joined forces to defend the land we live on and have inadvertently become a campaign group together striving to see an end to fossil fuels. We know that coal is the most catastrophic fossil fuel for our climate and that industries such as steel are rapidly developing new technology to eradicate coal use. We are so pleased that the council listened to common sense and stopped this application.”

There are currently no other applications for new opencast coal mines in the UK. What an incredible position to be in. There is only one opencast operating in England, it is due to close this year. There are none in Scotland and only two in Wales. We sincerely hope that the coal companies realise that “Coal is our heritage, not our future” as local people living in the North East’s ex-mining villages keep saying.

Defend Dewley Hill had instructed Richard Buxton, environmental solicitors, to contact the council on their behalf over worries that the Planning Officer’s report underestimated the likely impact on climate change; overestimated the benefit from fireclay and failed to properly protect local residents from noise and other impacts. The nearest homes are just 68m from the boundary of the extraction. The letter to the Planning Committee can be seen here.

Despite covid restrictions there have been numerous actions against this application this year. Cheeky supporters of the campaign dropped large banners from the High Level bridge in the City centre this week while pixies put out posters in bus shelters showing Banks Group’s real motivations. Check out the pictures. 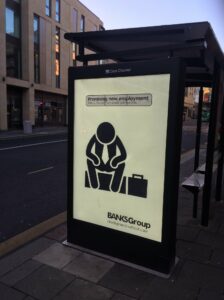 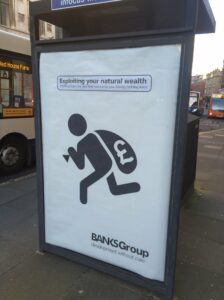 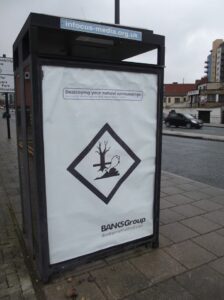 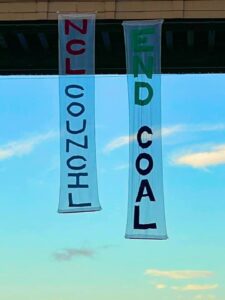 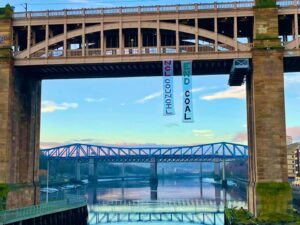 Beneath the concrete, the forest- Accounts from Atlanta Forest