IPP (Imprisonment for Public Protection) sentences were introduced in 2005 and abolished in 2012, but not retrospectively, meaning that there are 2,480 people still locked up indefinitely in England and Wales.

Under the legislation, people would be sentenced to an initial ‘tariff’ (minimum time that must be served) and, after that point, their release would be decided by the parole board.

However, 90% of IPP prisoners have served their original sentence and are still waiting to be released, due to constant parole board deferrals, having to complete useless courses with years-long waiting times, and the general attitude of the state of not caring the least about those it considers to be the “underclass”. The IPP is part of the war on the working class.

Even if IPP prisoners manage to jump through the hoops and convince the parole boards that they are no longer a “danger to the public”, the sentence carries a 99 year license, meaning that they face arbitrary conditions on their freedom and can be recalled to prison at any time for something that’s not even considered a crime. Even politician David Blunkett, whose idea the disastrous Criminal Justice Act of 2003 was, admitted that ‘we certainly got the implementation wrong’.

As if simply being locked up wasn’t bad enough, the rates of self harm and suicide among IPP prisoners is much higher than that of the general prison population, due to the uncertainty of not knowing when, or even if, you’ll be released. The harm to families and communities is incalculable. 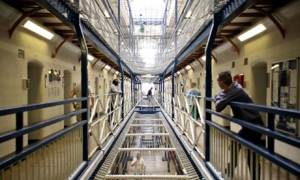 DONATE HERE It’s (almost) Taylor’s Birthday and, after waiting 6 months since his parole hearing, Taylor will soon also get Release on Temporary Licence (ROTLs). This means, after almost fifteen years, Taylor will be able to spend time with his loved ones outside of prison.

DONATE HERE It’s (almost) Taylor’s Birthday and, after waiting 6 months since his parole hearing, Taylor will soon also get Release on Temporary