As is the anarchist way, Jewish abolitionists and our goyish friends will be holding noise demos to mark Rosh Hashanah and Yom Kippur; the Jewish New Year this Thursday, 24th September, at 7 pm outside HMP Manchester and HMP Pentonville in London.

Jewish tradition tells us to make noise on Rosh Hashana to wake us from the comfort and examine how we can improve over the following year. We see this as tied closely to the goyish New Year anarchist tradition of holding noise demos outside prisons to show solidarity and evoke some of that community that the state so brutally and thoroughly seeks to remove,

In this spirit, we will hold noise demos to mark the Jewish new year: to create connections through shouting over the prison walls, however fleeting those connections might be. We congregate outside of prisons to hold our service and demo to resist the ways in which prisons seek to isolate people from their friends and their families and from society at large. As Angela Davis says: “prisons disappear human beings”; they lay the blame for the failings of society on the shoulders of marginalised individuals. We remind ourselves and each other that however big the task is, we can take actions against and in spite of the capitalist, white supremacist state.

We do so in the tradition of proud, diasporic, anti-assimilationist, anarchist Jews. We don’t believe in the Christian concept of a binary between good and bad, deserving and undeserving. We think Judaism contains another perspective and way forward with dismantling of the white supremacist prison and psychiatric-industrial complexes. We are not experts, but we recognise that we find a way forward by building relationships between all of us living under different aspects of the carceral state.

For us, being Jewish and being an abolitionist can not be separated. What makes a Jew? A Jew is made when one pursues justice, when one has taken on the command to mend the world. We, as Jews, understand that we must fight tirelessly for what is just. That to pursue justice is to pursue the end to the systems of oppression. We oppose prisons, psychiatry, and nation states. We oppose carceral systems wherever they are, and whatever form they take.

We welcome you to join us on the 24th September if you can make it to Manchester or London. We will be observing social distancing and we will not be talking to cops. Please email shabbat_shutdown@protonmail.com if you can’t make it and would like a copy of our siddur-zine, with contributions from incarcerated and formerly incarcerated Jews and non-Jews, exploring the connections between Judaism and abolition.

Shana Tova, until all are free! 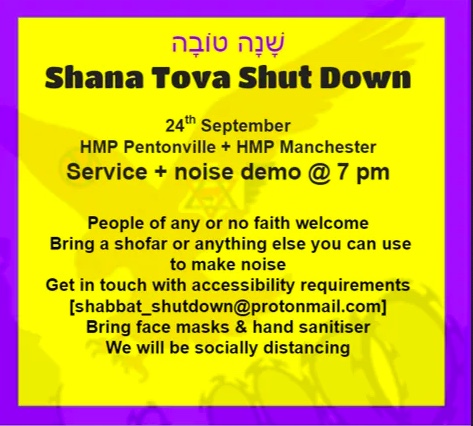 Write to the Kill the Bill Prisoners