“Our fates are all in the hands of a drone operator in a military base somewhere just over the Israeli border. The operator looks at Gaza the way an unruly boy looks at the screen of a video game. He presses a button and might destroy an entire street. He might decide to terminate the life of someone walking along the pavement, or he might uproot a tree in an orchard that hasn’t yet borne fruit.”

Atef Abu Saif, The Drone Eats With Me: Diaries from a City Under Fire

For the second time in less than a week, Bristol activists have targeted a crucial service provider to the Israeli arms company, Elbit Systems UK (ESUK). Last week, it was the offices of multinational law firm Osborne Clarke, where ESUK is registered, yesterday it was the real estate and property investment company, Jones Long Lasalle (JLL), Elbit’s London landlord. The ‘Grade A’ offices of JLL in Bristol were defaced with red paint, to symbolise the blood of Palestinians killed by Elbit’s weapons, and splattered with slogans to remind JLL to ‘Evict Elbit’. 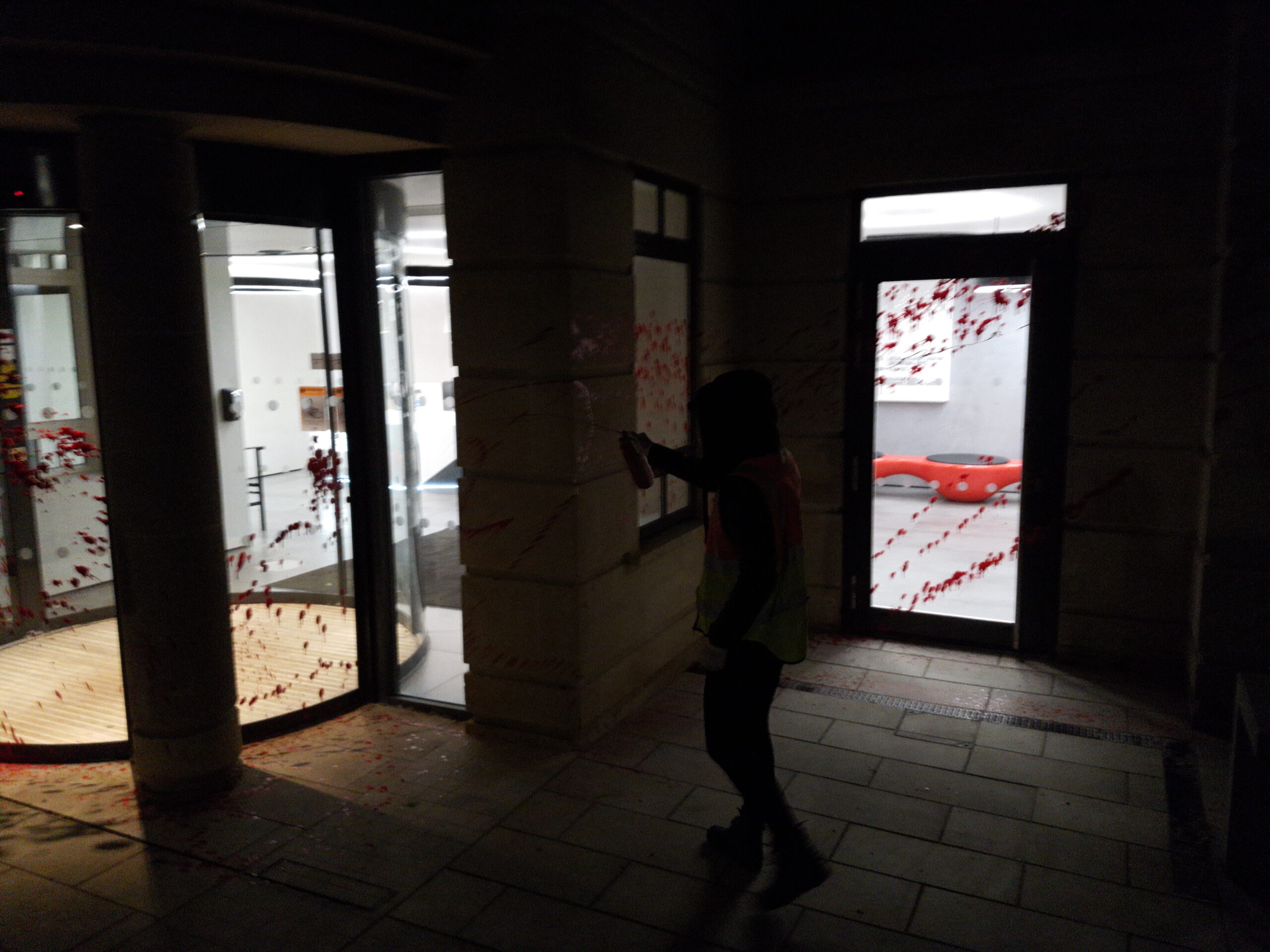 Activists have been targeting JLL as part of the attempt to shut down Elbit’s UK operations, and this action was the second in a week against the real estate agent, after the Manchester office was attacked on Wednesday. JLL’s subsidiary LaSalle Investment Management are the landlords of ESUK’s London headquarters, allowing the company to coordinate, lobby and scheme to market Elbit products manufactured in the different UK subsidiaries. ESUK has 5 such subsidiaries, one of which was occupied and shut down for 6 days at the end of last week.

Elbit Systems is Israel’s largest private arms company, a major supplier to the Israeli army (IDF), and responsible for producing the vast majority of Israel’s drones, whose traumatic and devastating effects Atef Abu Saif refers to in the quote above. Elbit’s drones helped to guide Israeli bombs towards their Palestinian targets in the 51-day onslaught in 2014, when over 2,000 Palestinians were killed, and Elbit’s drones have hovered menacingly above the Gaza strip, before and ever since. Two weeks ago, when Israel again bombarded the strip, killing nearly 250 Palestinians, Elbit’s drones played their part.

These are just three of the drone components which Elbit Systems UK, sitting in its London office, coordinates and markets – not just to Israel, but to other war zones around the world.